There are two choices for Hanyu Pinyin input of Traditional characters in Windows 10.

Your choice should be based not only on your preference for (or annoyance with) one or the other, but also with attention to what encoding standard is being used by the people you communicate or exchange documents with most.

Microsoft Bopomofo also does Pinyin, but in the infinite wisdom of Microsoft the name was changed from New Phonetic to this (微軟注音 in Chinese) in Win 8.

Let's call it 'MSZY' now. This IME is available in the Hong Kong, Macau, and Taiwan language options described on the previous page. It offers modern Traditional characters including the Hong Kong set, and supports the Taiwan Big5 or International Unicode encoding standards.

It offers the ability to enter Pinyin with or without tone numbers and phrase association, and includes tools like the IME Pad for lookup by radical and stroke count. Originally developed for Traditional characters only, it also offers a Simplified character option. Microsoft Pinyin, or MSPY (微軟拼音), is based on the SimpleFast version first introduced in 2010, and true to that name it is optimized for fast phrase-based input.

This IME is the standard Pinyin input method in the mainland China and Singapore language options described on the previous page. It offers a Sogou-style typing experience that automatically inserts apostrophes between each sound. It offers very good phrase association but few other ways to narrow down your candidate list, and in the initial Windows 10 release is missing the IME Pad and other tools last seen in Windows 7.

Originally developed for Simplified characters, it also supports a Traditional character set, however when in that mode it is missing a few features, and it is in the mainland GB Code encoding standard which can cause compatibility problems in your communications with other people. 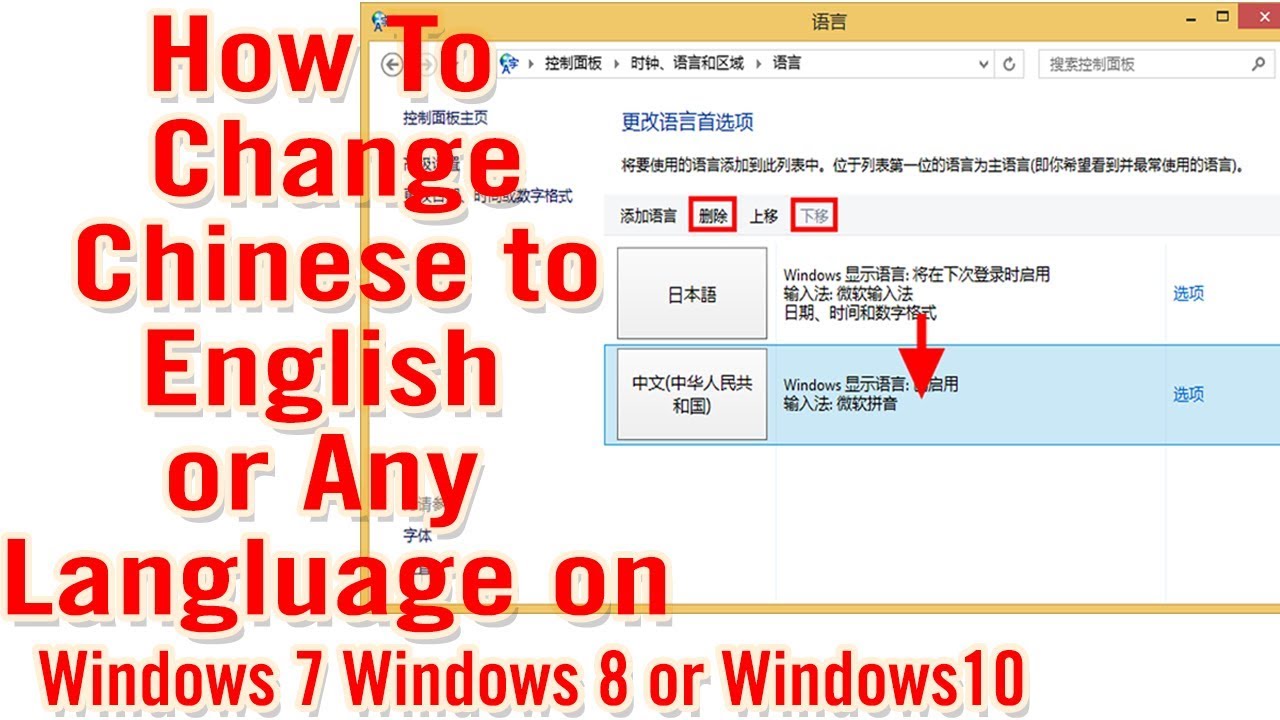 Assuming your language options are already set up to this point - as described on the previous page - go to the taskbar, open your language menu, and click 'Language preferences' at the bottom.

(If you are using the old-style desktop language bar, right-clicking on the language button there will take you to the old-style control panel, where you can make these same changes. You can jump to those instructions via this link so you don't have to scroll down.)

After selecting 'Language preferences', you'll find yourself at the Time & Language panel. In the left column, click on 'Region & language', then on the right under 'Languages' select the Traditional character region - '中文（香港特別行政區）' if you've selected Hong Kong as I've recommended, or Taiwan, or Macau - to reveal the buttons:

Click 'Options'. On the next panel that appears, scroll down if necessary and find 'Microsoft Bopomofo', select it to reveal those buttons, and click 'Options' there too:

In the Settings panel for Microsoft Bopomofo, find the 'Keyboard Layout' section, and click on the menu below 'Choose your preferred keyboard layout':

Select 'Hanyu Pinyin' from the menu:

Now close Settings, and you're done!

If you do not see that button, right-click on the taskbar (or on a touch screen, long-press and release), and in the menu that pops up, select 'Show touch keyboard button':

I'm going out of my way to mention this here because when you are in Zhuyin Fuhao input mode, the Touch Keyboard will have the Zhuyin symbols only, with no Roman letters on the keys, unless the full virtual keyboard is enabled. To enable the full keyboard, press the language key at the lower right, circled here:

Select the option circled here for the full virtual keyboard with Latin and Zhuyin keys.

You may find this or another button greyed out, because Windows 10 tries to give you only options the developers think are best for your PC.

If you cannot access the full Latin+Zhuyin keyboard, that is probably because you are on a desktop PC (or Windows 10 thinks you are). I have no hack to get around this, but you may find one out there on the web.

In the above example, I am using a laptop without a touch screen. On this laptop, I can have the full Latin+Zhuyin keyboard, the handwriting keyboard (see the Windows 10 handwriting, speech, and language packs page for information on activating that one), or the smaller Zhuyin-only keyboard. It will not let me use the 'split keys' keyboard, because that is only for devices with a touch screen. Again, I have no hack to get around this 'convenient' feature, but it may be worth searching for one.

If you are using the desktop language bar (which I show how to set up on the advanced features page), switch to the Traditional Chinese 'CH' and Bopomofo 'ㄅ' icons, click on the Tool menu, and then select 'Properties':

In Microsoft Bopomofo Settings, select the 'Keyboard' tab and change the preferred keyboard layout to 'Hanyu Pinyin'. (I refuse to even type the camel case they use there...). Then click the 'OK' button, and you're done!

Use the Microsoft Pinyin (MSPY) IME to input Traditional Chinese characters if you must communicate with people in mainland China or others who have their systems set to the PRC national standard encoding called GB Code. Also go ahead and use it if you're not worried about these encoding issues at all. But using this IME can result in scrambled emails if you communicate with people who use Taiwan/HK/Macau settings.

There are limitations to using this mode, some permanent and some that may be improved in future updates:

We can only hope these missing features will reappear in a free update...eventually.

Having said that, many people do use the MSPY IME to type Traditional characters, and if you are good at working in cizu and phrases it will be very fast. Here's how to set it up.

Open the Language menu, and at the bottom select 'Language preferences', as circled in the image here. You can also get here by typing 'Language' into the taskbar Search Windows box, or by navigating in from Start > Settings.

This will open the Time and Language settings panel. In 'Region and language', in the 'Languages' section, select 'China (PRC)' (中文（中華人民共和國）) to reveal the buttons:

Select 'Options', and then in the next settings panel scroll down to the Microsoft Pinyin keyboard, select it to reveal the buttons, and select 'Options' there:

Now in the settings panel for Microsoft Pinyin, change the characters set menu to Traditional Chinese.

'Personalization' will be disabled, because the candidate list will not sort automatically when you are using Traditional characters in this IME. (As of the Windows 10 launch, Personalization was also grayed out for Simplified characters in all of my installations, but I've received one report - from a user of a Spanish Win 10 release - that these controls are not grayed out on his system. Since mine is stuck in the 'On' position for Simplified characters, I'm not unhappy about this. Hopefully this switch will become available for Simplified after a future update, but Traditional is not likely to change.)

If you're planning to use the on-screen Touch Keyboard, click this link to jump up the page to my notes about making it show more than just Zhuyin keys.

Changing MSPY to Traditional from the old desktop language bar:

At the launch of Windows 10, as in Windows 8 there's not much in the desktop language bar for this IME. No Simplified/Traditional toggle button, no Options menu, no IME Pad, no Unicode number input, nothing. But you may have some other use for it, especially in other languages.

If you're using the classic desktop language bar on the taskbar (which I explain how to set up on the advanced features page):

Right-click on the 'CH' button or the 'M' (for Microsoft Pinyin) button. On the the menu that pops up, select 'Settings...'.

This will open the classic control panel. Click the 'Options' link for Chinese (PRC):

Then if you're lucky, in the Language options control panel, you'll find an 'Options' link for Microsoft Pinyin, which will open a control panel where you can make this change. But in all my initial installations of Windows 10, this link was missing!

I'm hoping that link will be there for you, or will appear after the next big IME update, so I went ahead and posted this info. But if not, you'll have to go back up to the previous instructions for the new Settings panels.